Agriculture is one of our region’s most important industries.

There is a strong interdependency of agricultural jobs and agricultural-related jobs in non-agricultural sectors which directly affect the spending power in the region. The “Local Food Movement” is also creating a significant impact through farmers’ markets, field to table restaurants, breweries, distilleries, cideries and wineries. Spokane is also home to Spokane Ag Expo and Pacific Northwest Farm Forum, one of the largest farm shows in North America. 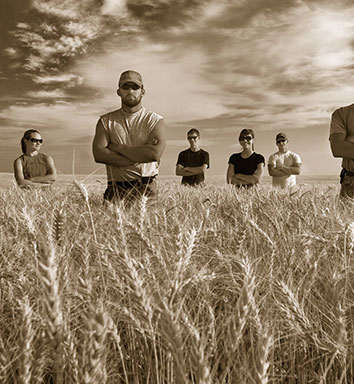 Award winning wines made from grapes sourced from some of Washington’s most prestigious vineyards.

Supporting farmers and agribusiness companies throughout the Intermountain Northwest.

The only program of its kind in Washington State that specifically focuses on developing adult leaders in agriculture, forestry and natural resources.

farms and ranches produce over $1 billion of products for an estimated $5 billion economic impact in Spokane and surrounding counties.

Spokane and the surrounding region is a mecca for agriculture. In Spokane County, the agriculture industry generates $117 million in annual economic impact and supports 1,576 jobs. Spokane County has the second-highest number of farms in WA state with over 2,500, and food processing in Spokane accounts for $566 million in revenue. Whitman County, just south of Spokane, is the #1 wheat producing county in the United States and ranks #2 in the country for barley production. Washington state is the leading U.S. producer of apple juice, and the second-largest wine producer in the United States with over 800 licensed wineries. Major commodities processed in WA include vegetables and fruits, dairy, and beef and seafood products.

Is the Spokane Region the right place for your business? Contact us today and we’ll help you get the answers you need.