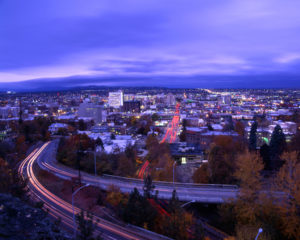 Opportunity Zones are low-income census tracts that must have an individual poverty rate of at least 20 percent, and family income less than 80 percent of the community’s median family income.

The Governor’s Office and the Department of Commerce worked with stakeholders across Washington, including economic development organizations like Greater Spokane Incorporated, counties and tribes, to identify a process for nomination of census tracts.  The stakeholders developed a two-step process which provided a set aside of tracts for counties and tribes, and then a competitive process for nomination of additional tracts.

GSI worked with Spokane County, local municipalities, developers and other partners to identify five tracts for the initial automatic designation. The number of set-aside tracts was based on the total number of eligible low-income census tracts in Spokane County.  Census tracts with a strong pipeline of ready development projects were selected.

“Greater Spokane Incorporated was pleased to work with the Department of Commerce on the streamlined process for submittal of the County’s census tracts,” said Todd Mielke, CEO of GSI.  “And our local partners worked quickly to identify the tracts, prepare the applications and deliver the list of shovel ready development projects.

The Board of Commissioners reviewed the submittal, and provided a letter of support to accompany the application.

“As Commissioners, one of our most important roles we have is to convince employers to either stay, expand, or relocate here in Spokane,” said the Chair of the Spokane County Board of Commissioners, Josh Kerns. “Utilizing this program will help spur economic development in the region and is a win for our entire county.”

The City of Spokane submitted four eligible tracts for the set-aside designation, including one covering the South University District/East Sprague area and a second one focused on the heart of downtown Spokane known as the Central Business District.

“The city has invested significant resources into job creation, increasing the number of living wage jobs, and fostering new housing options, particularly in targeted areas,” said Spokane Mayor David Condon. “This new federal designation in up-and-coming areas of Spokane, which have seen investments ranging from infrastructure to urban experience, will be another resource that sets the city apart as a competitor for business expansion whether locally or from outside the Intermountain Northwest.”

In addition, two census tracts in the West Central Neighborhood were submitted by both the Greenstone Corporation and the City of Spokane.  Projects in these tracts include residential, retail and commercial, in addition to affordable and market rate housing units.

“Implementing Opportunity Zones in West Central and other inner city neighborhoods is another step in improving the vitality of Spokane,” said Jim Frank, Founder, Greenstone Corporation.  “Incentivizing businesses and individuals to continue to invest is critical in the transformation of our neighborhoods and Downtown. Opportunity Zones will expand the ongoing economic revitalization of our community.”

“Healthy cities are always looking for ways to grow businesses and services,” said Airway Heights Mayor Kevin Richey.  “To that end, this program will further the economic diversity and vitality of the region, and generate much-needed jobs for our residents.”

GSI is continuing to monitor the Opportunity Fund legislation, and working with partners to promote and market this new program.

The US Treasury Department and the Internal Revenue Service are compiling information on Qualified Opportunity Funds, and details will be released soon.

This City of Spokane census tract is located in the South University District/East Sprague area of the city.  The tract includes some of the oldest industrial areas in the City which required intense brownfields redevelopment prior to becoming the hub of the community’s University District, now home to five universities, two community colleges and a smart city laboratory, called Urbanova.

This City of Spokane census tract is located in the heart of downtown Spokane.  As the Central Business District for Spokane County, this tract has experienced intensive redevelopment due to economic conditions.  The tract includes the 100 acre Riverfront Park and the Public Facilities District owned and operated Convention Center and Performing Arts Center.

This Airway Heights census tract is located on the West Plains, and is centrally located between Fairchild Air Force Base to the west, and Spokane International Airport to the southeast.  The poverty rate is over 25%, with an unemployment rate of 11.9%.  In addition to the City of Airway Heights, this census tract also includes tribal lands of the Kalispel and Spokane Tribes.

This City of Spokane census tract is located in the West Central Neighborhood and is located generally west of Maple Street and north of the Spokane River.  It is dominated by residential uses, with a reported poverty rate of over 38% and an unemployment rate over 12%, both far in excess of local and national averages.  Median income is 49.83% of the local median family income.

This City of Spokane census tract is located in the West Central Neighborhood and is located on either side of Monroe Street and north of the Spokane River.  It is dominated by mixed commercial and residential uses, with a reported poverty rate of over 50% and an unemployment rate over 20%, both far in excess of local and national averages.  Median income is 19.78% of the local median family income.

These City of Spokane census tracts are located in Northeast Spokane, an area known as THE YARD.  THE YARD investment area is implementing the City’s Economic Development Strategy, the City’s Strategic Plan and the City’s Comprehensive Plan, in addition to a three neighborhood Consolidated Plan and the Zone Plan.  This area is designated as the Northeast Public Development Authority and offers Tax Increment Financing, Community Empowerment Zone and Multi-Family Tax Exemption incentives.  The state recognizes this location as a Hillyard Brownfield Redevelopment Opportunity Zone as well.